Cinnamon is a meal condiment that’s used in a legion of traditional cuisines and delicacies. It is not only used in cuisines around the world for its galvanising aroma but for its health benefits too.

Cinnamon, commonly known as ‘Dalchini’ and ‘Tvak’ is a brilliant pacifier of vata and kapha dosha. It is of madhura katu rasa (Sweet-pungent taste) and characterises ushna viirya (Hot potency).

Cinnamon is an extensively prized ingredient (powder, raw, or oil) as it incorporates medicinal values. It has been used in holistic treatment in Ayurveda since ancient times and is arguably one of the most known spices for its medicinal values, globally. It is an effective remedy for diabetes, blood pressure, high cholesterol levels, heart diseases, menstrual pain, allergic conditions and many more health problems to name. 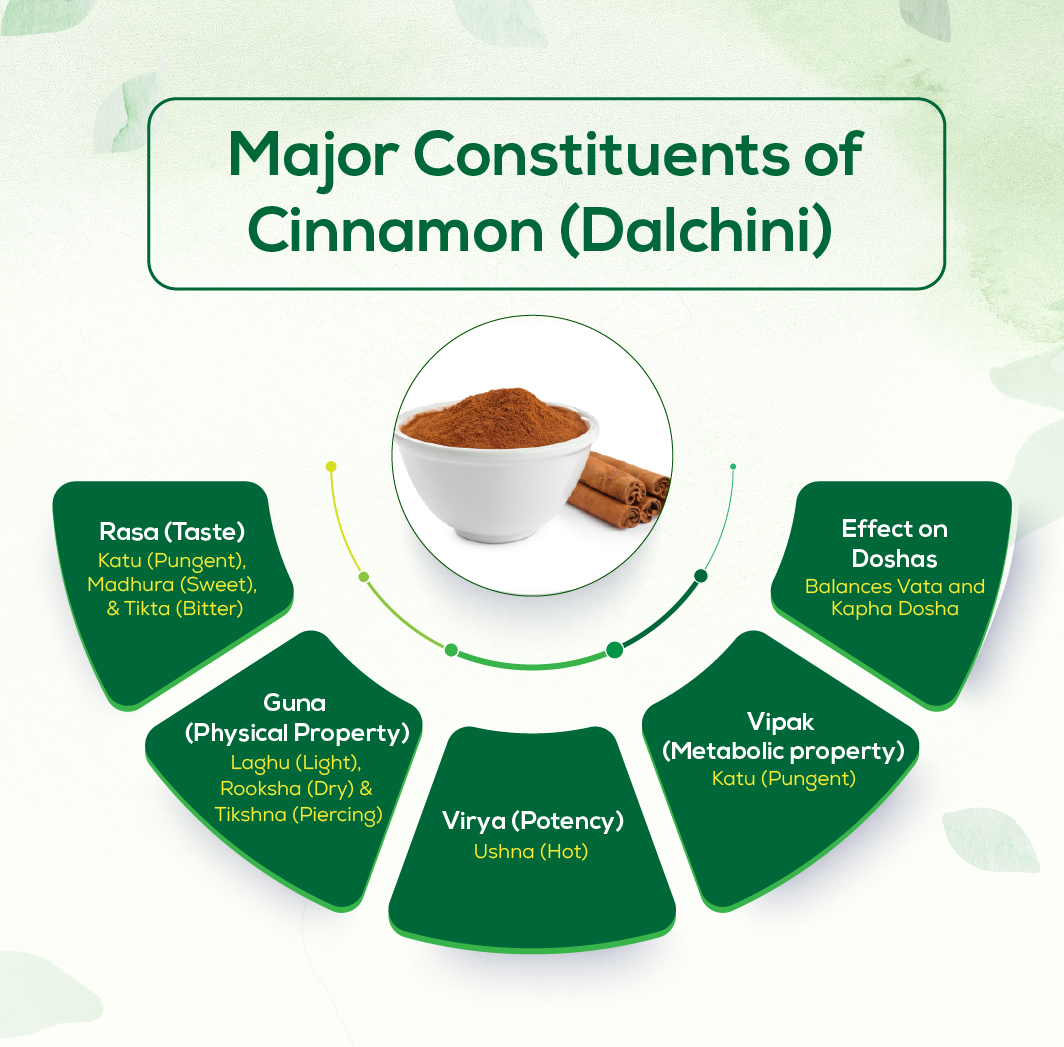 Cinnamon is no less than a wonder herb that has some miraculous properties to rely on like antifungal, anti-bacterial, anti-oxidant. These properties help to reduce high cholesterol, sugar level, complications related to the gastrointestinal tract, muscle growth, control vomiting, and offer strength to the heart. There are some amazing benefits of Cinnamon, let’s discuss them in detail. 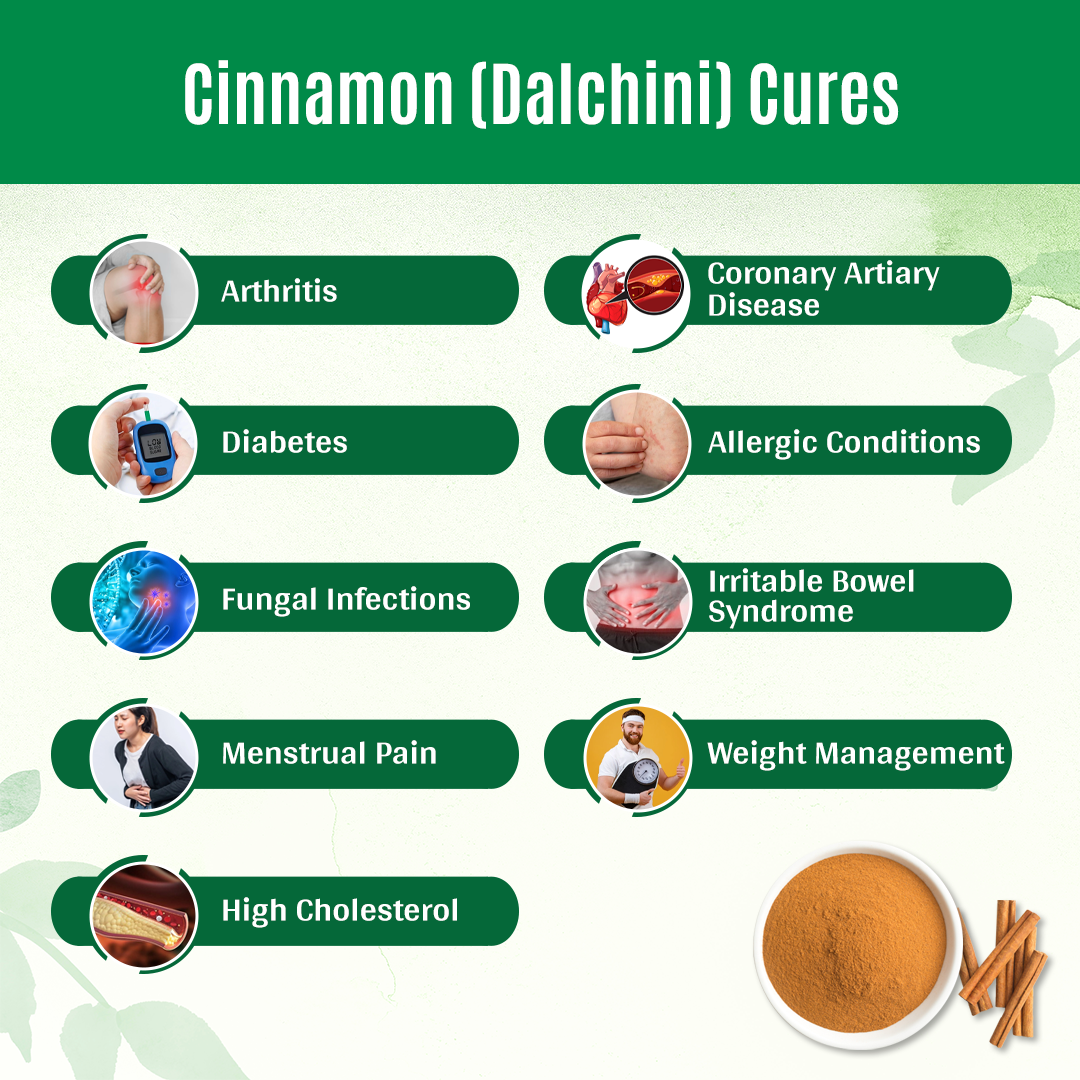 Madhumeha or Diabetes is a result of extensive dhatu shaithilya, kleda and aam accumulation. Accumulation of ama or toxins in the body leads to dhatu dushti and excessive mala sanchiti (accumulation).

According to Ayurveda, Cinnamon helps to control sugar levels by reducing ama and kleda due to its hot potency and deepan, pachan ability, which metabolises and also eliminates aam, kleda and corrects the deranged dosha and dhatus.

Drink Cinnamon water daily to see its result gradually. A constant intake of cinnamon can help reduce the serum glucose level in a diabetes patient.

An increase in weight is due to unhealthy eating habits along with consuming junk food. It’s the main cause of impaired digestion, accumulation of ama, and imbalances in the metabolism of meda dhatu resulting in obesity. Cinnamon’s ushna nature kindles a digestive fire and cures impaired digestion. It scrapes off the excessive meda (fat tissue) and reduces the excess ama collected in the body, thus helping the body to utilise the fat accumulated due to impaired digestion.

Boil water with Cinnamon, cool it completely and add 2 tsp honey to it. Have it early morning to see the results.

Technically, allergy occurs when the vitiated doshas amalgamate with the bodily toxins and get access to the rakta dhatu. Sometimes deranged pitta dosha finds its access to rakta dhatu and further disturbs its composition. Cinnamon being tikta (bitter), Madhur (sweet) in taste, pacifies pitta, it also has the ability to detoxify rakta dhatu, and thus facilitates the elimination of the toxins and allergy symptoms from the body.

Step 1: Take 1-2 pinch of Cinnamon powder and mix it with a few drops of honey and ghee.

Cinnamon is an excellent remedy during cold and cough times. It liquifies the kapha and clears the throat pain. The pachan effect also proves beneficial in conditions when cough, cold is associated with fever especially during the cold season.

You can have cinnamon powder mixed with honey or just sip water medicated with cinnamon and coriander seeds.

In Ayurveda menstrual pain is also known as kashta-artava. According to Ayurvedic ancient texts, kashtaartava is a result of impaired vata which can lead to excruciating abdominal pain and recurring cramps. Cinnamon or dalchini rectifies the movement and functioning of vata, this helps to reduce abdominal cramps and dysmenorrhea pain.

Step 1: Warm water and add a small piece or a pinch of cinnamon stick or powder respectively.

Step 3: Strain and squeeze a few drops of lemon into the cinnamon water.

Our arteries help our heart to pump blood to the rest of the body. Coronary Artery Disease is a heart condition that narrows the arteries while hardening them, making it hard for the blood to reach the organs. This is primarily due to the deposition of plaque in the arteries. Cinnamon is a herb that is known to reduce the risk of heart diseases.

In Ayurveda, CAD or Coronary Artery Disease falls under sira dushti (narrowing of arteries) that is caused due to impaired kapha dosha, accumulation of aam and rasa dushti. Cinnamon with its ushna virya (hot potency) and deepan, pachan ability rectifies balance of kapha dosha, neutralizes aam and corrects the composition and metabolism of rasa dhatu. It thusprevents blood clotting, improves musculature of sira (blood vessels) and prevents CAD to some extent.

Cinnamon is a herb that can be also used to cure fungal infections and reduces the risk of fungal and yeast infections.

Including cinnamon in food, preparations serves the purpose.

Cinnamon is hot in potency, hence it is always advisable to take it in small amounts for a short duration of time. People with gastritis or aggravated pitta (heat) should consult an Ayurvedic consultant before adding Cinnamon to their diet.

Pregnant women and women during breastfeeding are advised to consume Cinnamon strictly under the guidance of an Ayurvedic specialist only.